The postseason is upon us and it’s time to take a look at our upcoming schedule for each team:

The baseball team consists of a good mix of young and veteran talent.  The Marauders have navigated a challenging schedule and currently sit at 13-8 with four regular season games remaining.  Seniors Jaden Cappelletti (.444 BA/.545 OBP/.571 SLG) and Dino Tharp (.431 BA/.492 OBP/.725 SLG) help lead a team that has shown some serious offensive firepower this season, boasting a team batting average of .331, and scoring an average of 7.5 runs per game.

The 2018 edition of Lady Marauders softball has put together one of their best seasons in recent memory, sitting at 18-6 with two regular season games remaining.  The Lady Marauders finished 5-2 in a strong HHC field, which was good enough for 2nd.  It’s hard not to find a major contributor in a lineup that is hitting .402 on the season with 29 home runs.  Senior Kaitlyn Nugent is hitting a scorching .512 with 10 home runs, and freshman Haley Kissee has added another 7 home runs while hitting .438.  Sophomore Sydnee Perry (.400 BA, 5 HR), freshman Riley Hasseld (.411 BA) and senior Cassidy Parker (.408 BA, 4 HR) round out the Marauders hitting over .400 for the season. 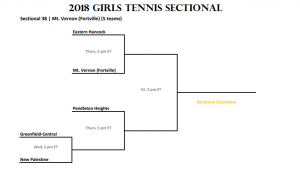 The #27 Lady Marauders entered the season with a tougher slate in front of them having added the Zionsville Invitational (6 ranked opponents), Hamilton Southeastern, and perennial HHC power Delta on the schedule.  Mt. Vernon finished the regular season 15-3 and enter the postseason as the favorites to win their 5th straight sectional crown.  The Lady Marauders have found balance throughout their lineup, which includes:

The boys golf team came into 2018 having graduated their top two players in Oliver Mast (UIndy) and Will Dant (Indiana Tech).  A mixture of youth and experience has provided for a successful season that has seen the Marauders finish 2nd in the HHC, just 2 strokes behind the winners from New Castle.  Senior Xavier Dunham has taken on the leadership role, playing in the #1 spot throughout the season.  Sophomore John Husar, Senior Max Heitman, and freshman Sam McWilliams have also been consistent members of the varsity squad.  Blake Johnson (11), Elijah Dunham (10), and Haiden Rose (9) have battled it out for the 5th spot throughout the season, showing the depth and consistent play throughout the Marauder lineup.

The sectional field includes conference foes Greenfield-Central, New Palestine, and defending champion New Castle.  The top three teams advance to the regional, and the Marauders look to have an excellent chance to compete for the title and advance.

Mt. Vernon will again host the boys track sectional on Thursday, May 17th, at 5:30PM.  We will update results after the event is completed.